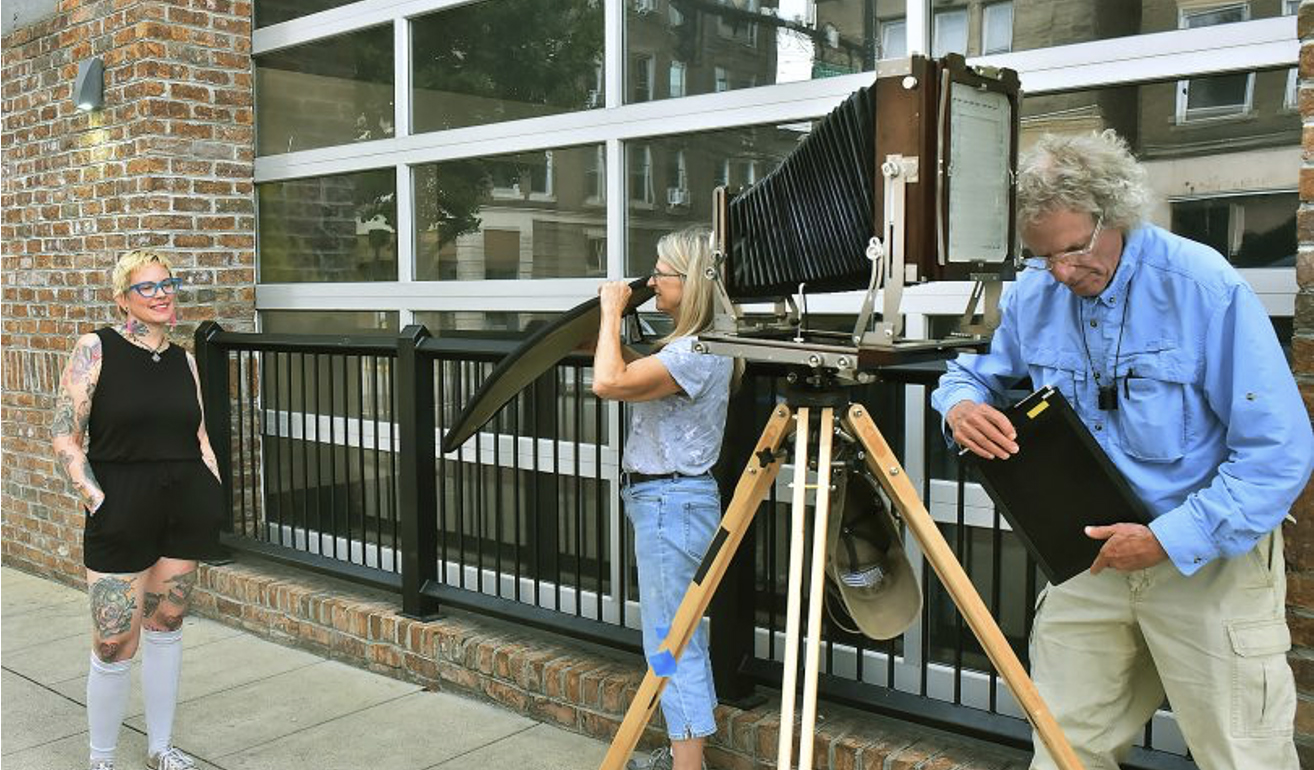 Robert Kalman is traveling through cities across the country taking black-and-white portraits of people he meets, using an 8x10 view camera. Here, Kalman photographs Jillian Kelly on High Street, while his wife, Linda Kalman, holds a reflector to balance the light. Kalman is getting a film holder for the next shot. (Ron Rittenhouse/The Dominion Post)

An American moment, in Morgantown: Traveling couple takes the pulse of the nation in photographs and ledger entries

It’s hard not to be intrigued, and even harder to resist, when Linda and Robert Kalman approach you.

There’s Linda, with her Midwestern geniality and folksy friendliness.

And there’s Robert, with that 8×10 large-format camera: an old-school, image-capturer that looks like it came from the aftermath of a Civil War battlefield.

Or, a pre-Depression bank, perhaps, for a formal pose of the board of directors.

Two questions, the same for everyone who stops long enough to chat, follow.

In the meantime, “old-school” is the watchword for this husband and wife from New York’s Hudson Valley.

Since last January’s insurrection at the U.S. Capitol, they’ve traveled large swaths of the northeast and southeast with that big camera and those big questions.

Or, the one big question, anyway.

That’s why they were in Morgantown for two days last week. The University City seemed like as good a place as any.

Following the events of Jan. 6 in Washington, D.C., they ventured into New York City from their small-town of Brewster, some 60 miles north.

They really hit the road after Juneteenth, doing 100 portraits and interviews or better, of people from all walks in the metropolis.

Those who posed jotted their answer to question No. 2 in a ledger, in exchange for a free copy of the photograph Robert just made.

However, they soon realized they needed to widen the narrative net.

But there’s a book in all of it, they said.

That’s what Robert and Linda are planning — a book, incorporating the photographs and written responses of their travels.

It’s an extension of what they’ve done in earnest for the past two decades after retiring from their “real” jobs, as Robert said.

He was an elementary school principal and she was a social worker.

Since then, they’ve done their work from New York City’s eclectic East Village to the downtrodden villages of Nicaragua.

Dog owners, American Legion members, people of color and those who are gay and lesbian have appeared before their lens and in their ledger.

Visit www.robertkalmanweb.com for a portfolio of photographs and more information on their work and projects.

Their current project, in the meantime, it isn’t about passport stamps or bumper stickers.

Rather, they’ll say, it’s about moments: Fleeting captures of intellectual intimacy and the physical vulnerability that comes from looking into a camera.

Robert has been compelled to make photographs since 1959, when his parents gave him a box camera for his 10th birthday.

Besides New York City, they’ve traveled to the Deep South, Pittsburgh and Wheeling in their current quest.

This past Friday, they lit out from Morgantown to the Martinsburg area in the Eastern Panhandle.

After that, they’ll point their camera to other side of the Mississippi River, to Linda’s native Kansas, plus other planned stops in Texas, Arizona and California.

To date, Robert and Linda said, those ledger answers have been free of political rancor.

In fact, most are pretty open and optimistic, they said, even invoking an ideal of America from generations long past.

“One person wrote that being an American to him meant, ‘Being comfortable in a state of change,’” Robert said. “I was impressed.”